Hans Piter Hylander: “I’m sure, we will have a wonderful regatta and beautiful races!”

– Is it your first visit to Russia?
– No, I was in Moscow a couple years ago for the Finn Junior Worlds – the Silver cup. So, it’s the second time, but the first – in Saint-Petersburg. Unfortunately, I haven’t seen much. We came to airport, and then we took the main road round the city, came to the hotel and here, to the club. So, we haven’t actually seen anything yet. But we’re looking forward to see the beautiful city of Saint-Petersburg.
– And what can you say?
– Now I don’t know very much about currents and weather terms. I know that Neva is running out here, but I don’t know how much it will affect the course and all that.
– Have you used to be the principal officer, or it’s something new for you?
– No, I used to. I’ve been working this way since 1997. I did it in Sweden, in some other countries, helping clubs with regattas. Also, I worked at some Olympics – China, 2008. They haven’t invited me in London at 2012, because they have their own experienced race-officers. China doesn’t, so they needed a lot of people to help them and to work at races.
– How do you feel yourself as the main person in a race?
– I’m only a part of a team on the water, so I will work close with Anna, we worked together in Moscow as well, so she will help me and I will help her, and I think it will be good! We’ll try to make a starting line as wide as possible, so the boats will be spread all over the line and not punch each other. We will try to make it good for the sailors. Our position is on a start, but maybe we will go with a smaller boat over to the finish.
– Some judges like to be soft with races, some, vice versa, like to be tough and strict. What is your style?
– No, I don’t have one, but I mean that my job is to try to make a god regatta, so, sailors are happy, organizers are happy, and that’s it. It’s not good to disqualify half of boats at the first day – no one will be happy about that. So we try to make a good way to do it, just something in the middle. You don’t have to be tough, but you have to be consistent, so sailors know, what’s going to happen; judgment must be the same every day to all sailors.
– Some time ago, you were a sailor. What do you like more: judging or sailing?
– This year I was sailing, again. Sailing is the good thing! I like the smaller boats, judging and sailing on. That races are very close, all boats are the same – like these ones. I have been sailing on big boats as well – Offshore-racing. It’s a lot more complicated, when there are ten persons on a yacht, you have to train a lot, and everyone has to know what to do and it’s very complicated. It’s fun, when it works, but it isn’t easy. And if to compare, I like sailing more.
– And the last question. What do you expect of this regatta?
– You know, it is always hard to know, what to expect. So, I think, maybe, it’s better not to expect too much. But I expect having a good time here, good people to work with. We will try to do the best for sailors and organizers and to make a good regatta. We are outdoors, and I think we depend on the weather. If we will have sun and wind – we will have a wonderful regatta and beautiful races. 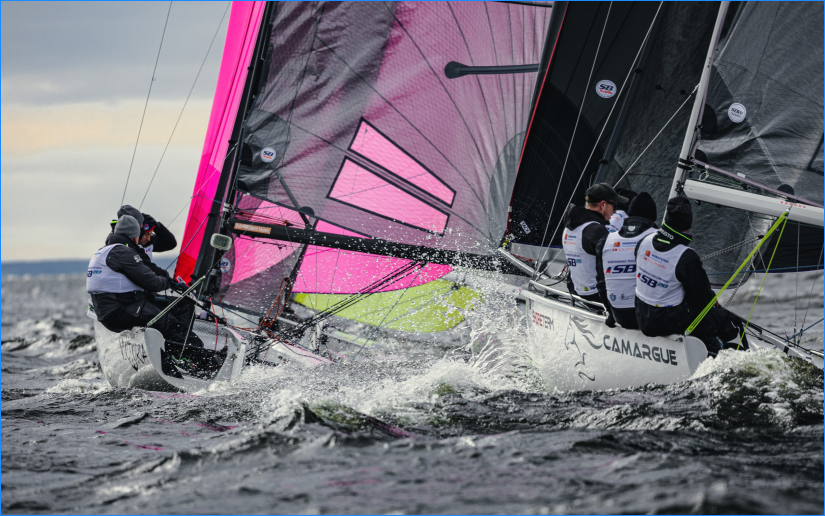