The second racing day SB20 Russian Open Championship appeared to be extremely long. Again, a patchy wind dominated at the race course. After two abandonments, the race committee finally managed to pull out three good races. So the leader board has shuffled. 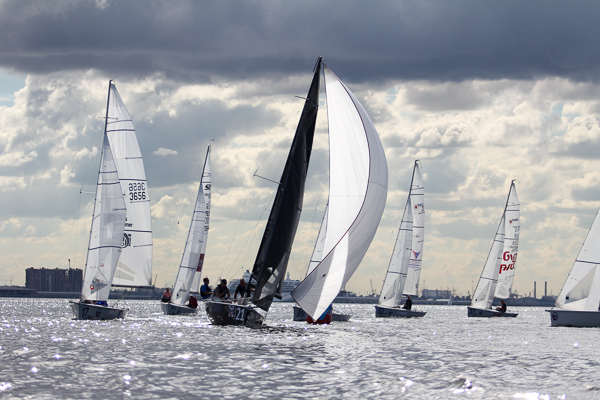 “This was really hard day but we managed to stay focused” comments Alexey Semenov whose international team posted two bullets in three races and climbed to the first place. “We had a good start in the first race as well, but then we parked in a wind hole just to see several boats passing by. Then wind picked up for the second and third races and we showed a good result”, continues Alexey.
After really busy opening day of the Championship even more effort was expected from the race committee to set a fair race course. The day started with promising N wind but right after the start of the first race wind moved 90 degrees. And again, next attempt also wasn’t successful. Only after two abandonments racing had finally begun.
Needless to say that it was very hard to stay focused for more than 7 hours spent on the water. “We were about to show good results in the two abandoned races”, says multiple Russian match race champion Evgeniy Neugodnikov , “but in that particular race, that turned to be first counted, we did several mistakes and finished 8th. Than we were lucky to progress and finish among the leaders”. Evegeniy’s team showed the biggest move in the leaderboard so far: from yesterday’s 9th they jumped to 4th and now reasserted themselves as real contenders for the medals.
Big changes also happened in the top-three. Besides Russian-Spanish entry “New Territories” that gained leadership, Vladimir Prosikhin’s “Team Nika” moved up from 4th to 2nd and early leader Valentin Uvarkin dropped to 3rd. “in the second race of the day we missed the shift and got caught up in a hole”, comments Valentin, “hope that tomorrow we can be more focused”. 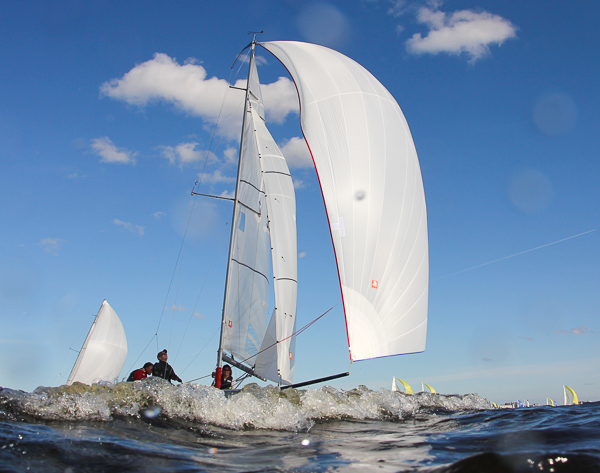 But the biggest upset of the day come from Portugese entry of Paulo Ramada who was second overnight. Despite good results in the second and third races Paulo was slashed by black flag disqualification in the first race of the day. Even that this result was later dropped, Ramada went out of the top-three and finished the day at fifth place overall. However, given the amount of talent and experience the Portuguese helmsman has, one may still expect him to return. The only thing is that time runs out as tomorrow, 25th August is the last racing day. Three races planned if wind permits.
Results after 7 races:
1. RUS 3711 Hugo Rocha -16
2. RUS 3709 Prosikhin Vladimir – 20
3. RUS 3507 Uvarkin Valentin -23
4. RUS 3468 Bunzya Aleksey -27
5. POR 3554 Ramada Paolo – 29
6. RUS 3074 Klochko Andrey – 31
7. RUS 3301 Murashkin Alexey – 36
8. RUS 3707 Pushev Vadim – 39
9. RUS 3517 Gusev Alexey -60
10. RUS 3536 Savinich Igor – 62
SB20 Russian Open Championship press service
Event website: https://sb20class.ru/russian-open-2013-en/
Photos available on: https://www.facebook.com/lasersb3 (pls credit E.Razina/Russian SB20 Association)